Guerrero Calder & Nevelson, In Their Studios

In celebration of the 100th anniversary of Pedro E. Guerrero’s birth, the Edward Cella Art & Architecture Gallery presents the “Guerrero, Calder & Nevelson, In Their Studios” on view through March 4, 2017, at 274 S. La Cienega Boulevard in Los Angeles.

This exhibit highlights, for the first time, Guerrero’s intimate documentation of Alexander Calder and Louise Nevelson in their homes and studios.  This is just one of many gallery and museum shows that will take place in 2017 honoring Guerrero in this landmark year.

Frank Lloyd Wright isn’t necessarily thought of as warm and fuzzy. But he got along famously with photographer Pedro Guerrero, who started documenting Wright’s work at the tender age of 22 and continued to do so for the next 20 years. Guerrero, who was known for his combination of artistic talent and technical brilliance, went on to become the favored photographer of artists Alexander Calder and Louise Nevelson. He died in 2012 in Florence, Arizona, not far from his birthplace of Mesa.

In September, PBS premiered the film Pedro E. Guerrero: A Photographer’s Journey, presented by the American Masters series and Latino Public Broadcasting’s VOCES series. (The film will be available on DVD and for digital download starting November 17 at ShopPBS.org.) We spoke with Raymond Telles, who co-directed and co-produced with Yvan Iturriaga, about the experience of making the film. 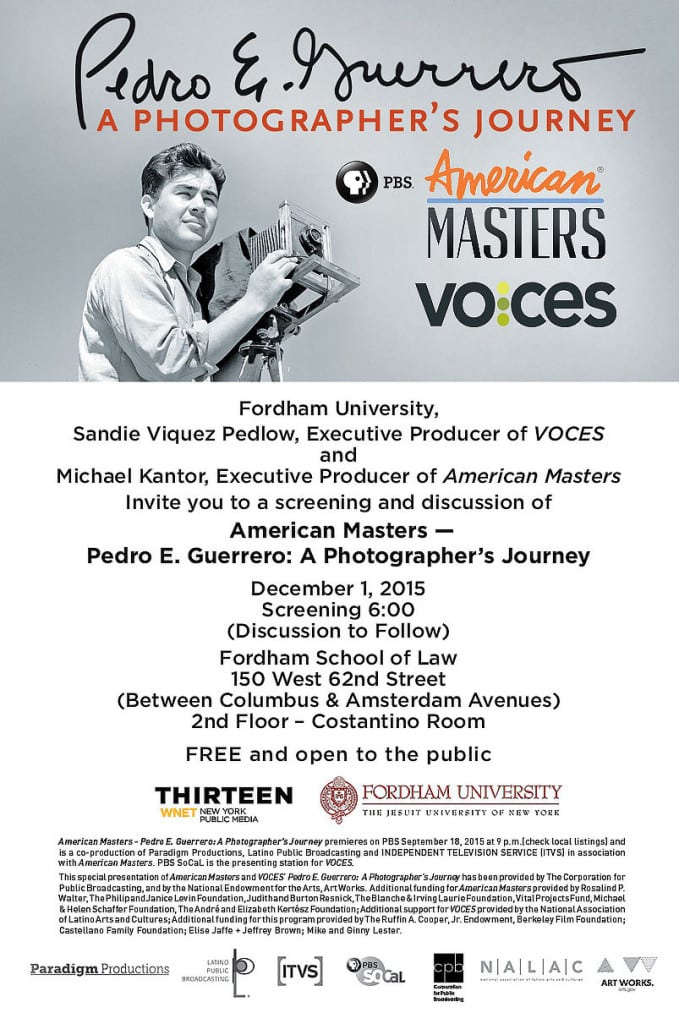 Fordham University and WNET New York Public Media invite you to a screening and discussion of the American Masters film Pedro E. Guerrero: A Photographer’s Journey.

The American Masters series and Latino Public Broadcasting’s VOCES series join forces for the first time to explore the life and work of photographer Pedro E. Guerrero (September 5, 1917–September 13, 2012), a Mexican-American born and raised in segregated Mesa, Arizona, who had an extraordinary international photography career.

Filmmakers Raymond Telles and Yvan Iturriaga (both Latino Americans) showcase an in-depth, exclusive interview with Guerrero alongside his photography to explore his collaborations with three of the most iconic American artists of the 20th century—architect Frank Lloyd Wright and sculptors Alexander Calder and Louise Nevelson. Using his outsider’s eye to produce insightful portraits of important modernist architecture, Guerrero became one of the most sought-after photographers of the era, yet his story is largely unknown.

Pedro E. Guerrero: A Photographer’s Journey highlights the milestones in Guerrero’s life, including his serendipitous enrollment in photography classes; his 1939 meeting with Wright at Taliesin West in Scottsdale, Arizona; his World War II service; and his post-war magazine photography career in New York City, where he shot interiors while his work with Wright continued. Settling in New Canaan, Connecticut, Guerrero describes his life after Wright’s death, his work with Calder, and the end of his magazine assignments because of his vocal opposition to the Vietnam War.

The Architecture and Design Network, in collaboration with the Arkansas Educational Television Network, will present the film “Pedro E. Guerrero: A Photographer’s Journey” on Tuesday, Oct. 20, at the Arkansas Arts Center, 501 E. 9th St., in Little Rock. The presentation will begin at 6 p.m. in the center’s Lecture Hall, following a 5:30 reception.

This is an American Masters Series film directed and produced by Ray Telles and Yvan Iturriaga, an award-winning team. The presentation will be followed by a panel discussion with Ethel Goodstein-Murphee, associate dean and professor of architecture at the Fay Jones School of Architecture and Design at the University of Arkansas; Brian Lang, chief curator at the Arkansas Arts Center; and Tim Hursley, architectural photographer.

The film shows the life and remarkable career of Pedro E. Guerrero (1917-2012), an Arizona native. In 1939, the 22-year-old Guerrero was a novice photographer just out of the Art Center in Pasadena, California, where he’d studied photography. Frank Lloyd Wright spontaneously hired Guerrero to document the construction of Taliesin West, which was being built overlooking Paradise Valley. They became close until Wright’s death in 1959.

Guerrero’s 20-year relationship with Wright catapulted him into the center of modernist art and architecture. Following his service in the Army Air Corps during World War II, Guerrero moved to New York City. He was still working with Wright and was highly sought after by major architecture and design magazines. He also went on to photograph the works of the sculptors Alexander Calder and Louise Nevelson, as well as the artists themselves.

This film includes excerpts of interviews with experts familiar with Guerrero’s work, such as critics and art historians. It also shows a glimpse into his early life while he was growing up in an Arizona town that offered limited educational opportunities for those with a Mexican heritage. While Guerrero intended to study art after high school, his introduction to photography altered his course.

The lecture is free and open to the public. For more information, contact ardenetwork

The Pedro E. Guerrero photo gallery is on the American Masters site, highlighting the range of his work and subjects. His widow and archivist Dixie Guerrero provided excellent descriptions that give the context in which the photos were taken and Guerrero’s perspective on his subjects. This page also invites people to share their own related photographs on Instagram with the hashtag #PedroPBS.

The New Canaan, Connecticut, Historical Society will host a special free screening of the American Masters documentary “Pedro E. Guerrero: A Photographer’s Journey” on August 30 at 3 pm. Call 203 966 1776 for reservations or more information.

Screening of A Photographer’s Journey at Monona Terrace in Madison, September 1 at 7 pm 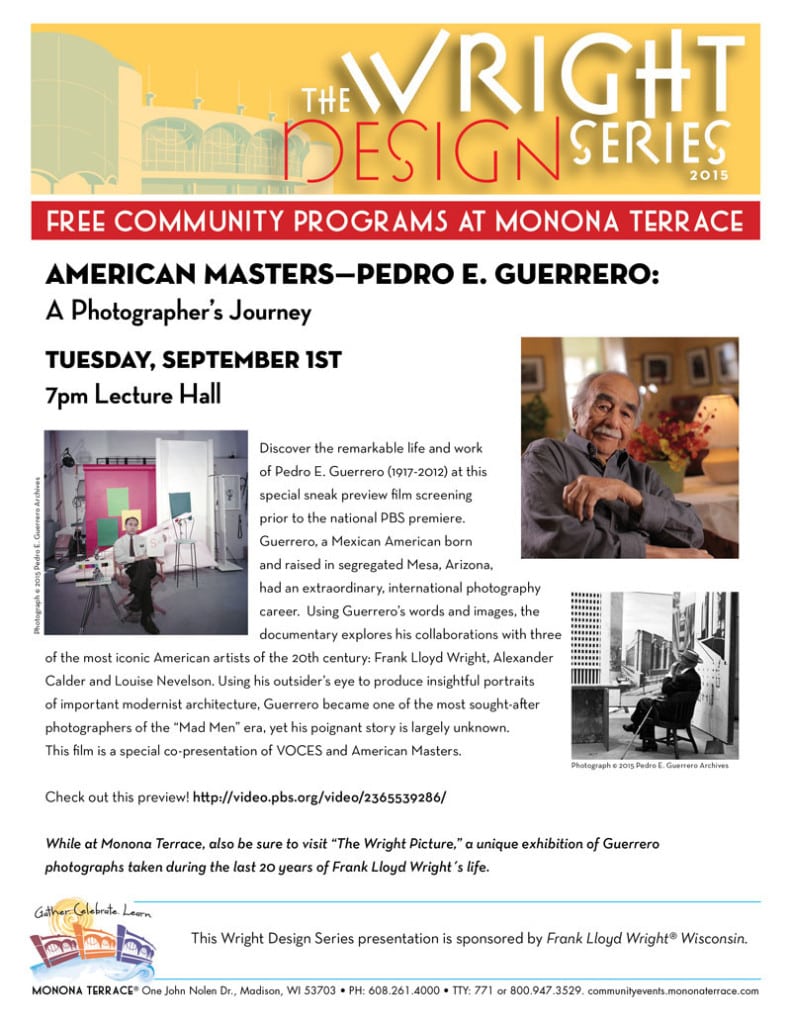 This year, Latino Public Broadcasting (LPB) marks its “Sweet 16,” celebrating sixteen years of developing, producing, and distributing media that portrays the richness of the Hispanic experience. LPB’s recent impact report highlights its achievements and awards over the years, and in September LPB will team with the “American Masters” series for a new documentary about the eminent photographer, the late Pedro E. Guerrero.

Since its founding, LPB has awarded over $10 million to independent producers, provided more than 200 hours of content for public television, and increased Latino viewership of PBS. LPB’s signature arts and culture program, “Voces,” has looked at everything from Latinas in Hollywood to the death of journalist Ruben Salazar to a Cuban woman who fought as a man during the Civil War. Other LPB programs include “America By The Numbers with Maria Hinojosa” and thelandmark multi-part documentary “Latino Americans.”

Sandie Viquez Pedlow, Executive Director of LPB, knew coming into her position four years ago that it would be a challenge. “With my background in public television, I saw this incredible opportunity,” she said. “I wanted to be a part of it, I wanted to help move the needle and engage audiences with Latino content.”

Part of Pedlow’s overall strategy has been to stimulate interest in Latino stories beyond the boundaries of Hispanic Heritage Month. “I wanted to take “Voces” out of Hispanic Heritage Month, because I want Latino programs (to be) on throughout the year. Let’s not just celebrate for a month, and then go back to (having) nothing else that is culturally relevant to our community on the schedule.”

Created in 1988 by Edward James Olmos and Marlene Dermer, Latino Public Broadcasting is funded by the Corporation for Public Broadcasting. According to their impact report, LPB programs have reached an estimated 84 million viewers on television, and won more than 80 awards, including the Peabody Award, NCLR’s Alma Award, and Imagen’s Norman Lear Award.

LPB’s reach and impact are significant. For example, the “Latino Americans” documentary series reached nearly three times as many Latinos than the typical PBS primetime program.

But for Pedlow, TV viewership is only a starting point. “We look to involve our audience with community engagement. We do partnerships at the local level for screenings, we do presentations to school groups and Latino civic organizations. We are expanding the footprint of the show into the community, so the conversations can go on.” LPB also repurposes its programming, creating digital learning kits that are distributed to schools across the country. 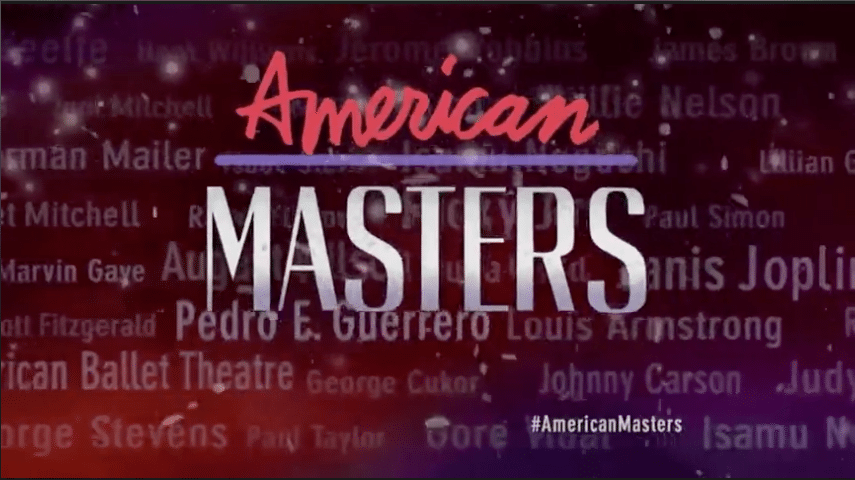 Raymond Telles, director of the upcoming “Pedro E. Guerrero: A Photographer’s Journey” said that LPB plays a vital role for directors of Hispanic-themed projects. “Even with a track record, it is hard to raise the money to make a film. Then you have to find a spot for it. You can make a film, complete it, but if you don’t find a broadcaster, you have no distribution.”

The late Pedro E. Guerrero was a photographer who collaborated with Frank Lloyd Wright, Alexander Calder, and Louise Nevelson.

“The PBS folks at “American Masters,” said ‘Why didn’t we know about Pedro Guerrero?” said Telles. “That’s why LPB has to be around, who else will promote these projects?”

Telles notes that Guerrero was a Mexican-American whose family had been in Arizona for generations. “Getting films like this out adds to the American narrative,” he said. “Immigration matters, but the Latino experience is so much more. LPB saw that, and funded a story that will challenge the stereotypes people have.”

Telles and other filmmakers say that, despite the increasing diversity in television, commercial networks shy away from the kinds of projects that LPB embraces. The major networks, these directors say, do not yet grasp the diversity of the Latino community.

“There is no way I could have made my film without LPB,” said Andrea Meller, director of “Now En Español,” which examines the lives of the women who dub “Desperate Housewives” into Spanish. “I went to LPB with a trailer, about three minutes long. I had filmed a little teaser, and then presented that to them and they liked it.”

“I wanted to tell a Latino story that wasn’t about inner-city struggles or poverty or about the border. It is a great story – that happens to be Latino,” said Meller. “LPB’s financial support was valuable but so was the validation that I was on the right track, all through the process.” She noted that at one screening, a high school audience in Texas peppered her with questions after seeing her film. “I never would have imagined that this group of young people would be so interested in the lives of dubbing actresses, but the identity issues really resonated with them.”

Phillip Rodriguez, director and producer of “Ruben Salazar: Man In The Middle,”points to a recent National Journal article that found that Latinos are almost as rare on television now as in the 1950s. “LPB serves a very important function,” he said. “They are nurturing the programming that would otherwise not occur, and providing people a way to break into this industry as well. Like most Latinos, I don’t have an uncle in show business; so LPB is important because it gives people a leg up, an entrée.”

Rodriguez said that he received a generally positive response from audiences and critics for his Salazar film. “But it still an extraordinary battle to get our stories out there, to insert them into the mainstream.”

Executive Director Sandie Viquez Pedlow is optimistic that LPB will continue to grow and thrive. “The more Latino stories we have on the air, the more impact we can have on the lives and image of Latinos,” she said. “I want our stories to be heard and understood by the American public. That’s when we make change, and that is our mission.”

Could Pedlow envision a day when a diverse TV landscape meant that there was no longer a need for Latino Public Broadcasting?

“I think there will always be a need for us,” Pedlow stated. “We may be called something else, but the stories will still be there. We have a lot of catching up to do.”